Scientific research for the development of organic and biodynamic agriculture

We conduct many different research projects on our farm (Juchowo-Kądzielnia-Radacz). Their aim is to better recognize mutual interactions among farm elements: soil, agricultural crops, animals and people working on the farm. In this way, we want to improve the functioning of the farm and, above all, achieve a stable soil fertility in order to sustainably develop field crops and pasture vegetation. Ultimately it will ensure long-term yields and positively affect the health of our animals.

Another goal of research is to cooperate with scientists and agricultural practitioners in order to consider real needs and interests of farmers. Dissemination of research results in scientific journals and in publicly available forms, for example on our website, aims to increase knowledge about organic and biodynamic agriculture and raise awareness that farming is more than just economic activity. This includes also nature protection, care for beauty and variety of landscapes, and production of public goods.

The idea of scientific research conducted on our farm is based on biodynamic assumptions (overall perception of the farm as an individual organism, its integration into the natural environment and landscape, and at the same time involvement into landscape shaping), ecological and systemic thinking. In reference with the above idea, research and development contribute to the prevention of problems that may arise on the farm, and if they occur, treat them as an opportunity for further, continuing development of the farm.

One of these projects is a breeding project, which aims to obtain healthy, long-lived animals that are best adapted to the conditions of our farm. To achieve this goal, an initial herd of cattle was created on the farm, which is a good base for further breeding and scientific research. The selection of animals for breeding is carried out in accordance with the criteria for the bovine animals developed in the early 1960s by professor Frederik Bakels.

The project is carried out in cooperation with European Association for Natural Cattle Breeding (EUNA) and Research Institute for Organic Animal Breeding and Land Use (Forschungsinstitut für ökologische Tierzucht und Landnutzung e.V. – FIT e.V.) from Germany. Thanks to cooperation with other European breeders and the exchange of livestock, our efforts in this field have international dimension.

The next research project in the field of cattle breeding is the GenTORE project (Genomic Management Tools to Optimize Resilience and Efficiency). The project runs from June 1, 2017 until May 31, 2020 and is financed by the EU's Horizon 2020 program.

The project consortium consists of 21 partners, one of which is our Foundation. The coordinator of the project is Dr. Nicolas Friggens from French National Institut for Agricultural Research (L'Institut national de la recherche agronomique – INRA). Juchowo Farm is represented by Prof. Tomasz Sakowski and MSc Monika Liberacka.

The aim of this project is to develop tools for targeting cattle breeding for immunity and performance. As part of the project, we decided to apply in our herd monitoring of dairy cattle. Sensors were installed on the ears of selected cows and an additional equipment was installed to monitor cows in stables and on pastures. Data collected by the monitoring system will be used to analyse production parameters, welfare and health of selected cows as well as for further breeding decisions.

Completed research project in the field of cattle breeding – 2OrgCows project. The project lasted from April 1, 2015 until 31 March 2018 and was financed by the EU Core Organic program.

The consortium consisted of 10 partners, one of which was our Foundation. The coordinator of the project was Prof. Sven König from the University of Kassel-Witzenhausen in Germany. Juchowo Farm was represented by Prof. Ton Baars, Prof. Tomasz Sakowski and MSc Grzegorz Grodkowski.

As part of the project, we conducted observations of dairy cows, both visual and with the use of electronic sensors. Based on visual observations and data provided by sensors, we collected information on various behaviours of cows, such as: chewing, feed intake, physical activity and rest. We also studied the nutrient content of the feed and the quality of milk of the monitored cows. In addition, a very important element of the research was collection and analysis of animal health data.

The next aim of the project was to develop indicators that would draw the attention of the breeder to possible health problems of cows, which would greatly facilitate sickness prevention in large dairy herds.

The research results showed that the electronic cow monitoring system facilitates the early detection of heat, metabolic disorders, lameness and mastitis. Thanks to such monitoring of cows' health, it is possible to detect and prevent the development of diseases earlier, the welfare of the herd is improved, the average inter-breeding period in the herd is shortened and the effectiveness of milk production is generally improved.

The results of comparative studies also showed differences between Holstein Friesian and Brown Swiss breed cows. Studies have shown that breeds differ in terms of milk yield during the grazing season and the decrease of milk production when the cows are kept indoor and in their overall health. The analysis of the data shows that Brown Swiss cows are better adapted to the natural conditions on our farm. In winter, they better process hay, which is fed to them in the off-season, react with a smaller decrease in milk yield and generally show less susceptibility to disease than Holstein Friesian cows.

Restoration and improvement of soil fertility

The soils of our biodynamic farm due to their long, inadequate cultivation during the functioning of the State Agricultural Farm have been significantly weakened, among others through the loss of humus that decides about soil’s fertility. That is why for many years we have been making every effort to increase its content, thus contributing to the improvement of soil fertility.

From 2017 we run long-term soil studies which cover the fields of our entire farm. So called compost project, is carried out in cooperation with the Department of Biogeochemistry and Soil Science at the University of Technology and Life Sciences in Bydgoszcz. The substantive work in the project is carried out by Mirosław Kobierski and Piotr Ignaszak. The aim of the project is to obtain a detailed picture of the chemical-physical properties of soils on the entire our farm, to investigate the effect of compost fertilization on the above properties and to determine the optimal system for compost fertilization optimally suited to the properties of our soils and the needs of our crops (and animals).

As part of the project, every year, we comprehensively analyse nearly 400 soil samples collected on the entire farm. We examine the chemical-physical properties of our soil samples, such as granulation, density, content of main nutrients, abundance in organic carbon and humus, pH and other. On selected fields we also study the long-term effect of compost fertilization on soil chemical-physical properties. For this purpose, the fields covered by the experiment are fertilized with various amounts of compost produced on our farm and we examine soil samples taken from these fields for the above-mentioned parameters and additionally for mobile forms of carbon and nitrogen and enzymatic activity.

The aim of the project is to obtain a detailed picture of the chemical-physical properties of soil of our entire farm and to determine the fertilization system with compost optimally adjusted to the properties of our soil and the needs of our crops and animals.

Going beyond the long-term soil research provided in the project, in 2017, one-shot comparative studies were conducted between the soil of our farm and the soil of a neighbouring conventional farm.

The results of the research have shown that many years of conducting biodynamic agriculture, in many aspects, positively influenced the chemical and physical properties of our soil. In comparison to the soil of the bordering conventional farm, the soil of our farm is characterized by a higher pH and a higher content of the main nutrients and microelements. However, the results of comparative research also show that the content of organic carbon and humus in the soil of our farm, even if it is higher than in the soil of the adjoining conventional farm, should still be higher. Therefore, we should continue to make every effort to stabilize and increase the content of humus in our soil and thus contribute to improving its fertility.

As part of scientific research from April 1, 2015 until 30 April 2018 we implemented the FertilCrop project, financed by the EU CoreOrganic program. The consortium consisted of 20 partners, one of which was our Foundation. The coordinator of the project was Andreas Fließbach from the Institute for Research in Organic Agriculture (FiBL – Forschungsinstitut für biologischen Landbau) from Switzerland. Juchowo Farm was represented by Prof. Ton Baars and Dr. Anna Szumełda.

The main goal of this project was to develop effective and sustainable strategies and tools to improve and maintain soil fertility, and as a result to increase plant productivity in organic farming systems. The focus of the project was farming systems based on soil cultivation methods that maintain its fertility, increased use of intercrops, varied crop rotation and mixed production.

As part of the project, we have mainly studied the impact of five different methods of soil treatment on the physical properties of the soil and its abundance of the main nutrients in our experimental plots established 2010.

The research results showed that the soil structure on the experimental plots is characterized by high uniformity, and the resources of the main nutrients have generally increased between 2011 and 2016. However, this growth cannot be clearly attributed to one or more of the five soil treatment methods tested in the project – results do not show an important link between the increase in the content of individual nutrients and the methods of soil treatment.

Further research within the project was related to various methods of reducing weed infestation, distribution of soil micro-organisms along the soil profile and their impact on soil functions, as well as review of knowledge on nutrient losses to water and atmosphere, and modelling of carbon emissions and sequestration of CO2 in soil. In the future the obtained results will be efficiently implemented directly into agricultural practice.

In 2018, a team of scientists from the Institute of Agricultural and Forest Environment of the Polish Academy of Sciences and from affiliated scientific institutions carried out a survey of biodiversity on three selected areas of our farm. The scientists investigated the biodiversity and abundance of nesting birds, carabid beetles, spiders, butterflies and vegetation. The aim of the study was to investigate the natural status quo of the three areas in question and to generate a basis for decision-taking on their further development (e.g. to exclude them from agricultural usage or to cover them by a legal form of nature protection). The 2018-survey provides a database that can be used for monitoring future changes of biodiversity in the areas covered by the study.

In April 2018, next to carrot beds, we saw a strip with a mixture of flowers. The flower strip and the carrots beds are covered by one-year scientific research, which is carried out by a team of scientists from the Institute of Agricultural and Forest Environment of the Polish Academy of Sciences and from affiliated scientific institutions.

The aim of the project was to investigate the impact of the flower strips on the diversity and population of insects, primarily of those insects, which by feeding on carrot pests have a positive impact on yielding of carrots. In this way it was studied the effect of the flower strip as an ecological protection of plants, in this case of carrots, and for the enrichment of insects’ biodiversity.

Biodynamic agriculture in Juchowo operates in a closed cycle

cows receive feed produced on our farm. Manure is composted, and the compost fertilizes our fields. 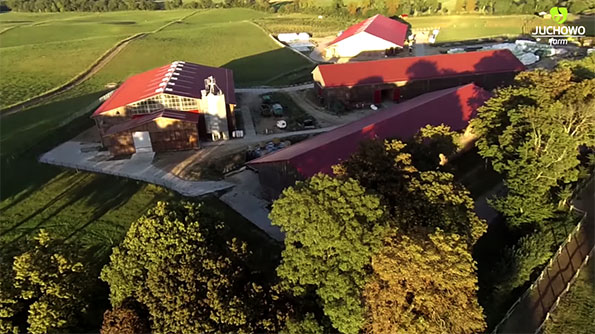